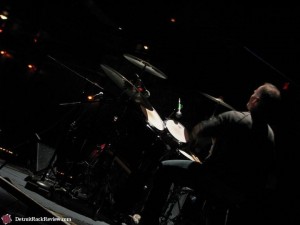 I first remember sitting in my room in Midland and hearing the live version of ‘2112’ by Rush. I spent many hours recording songs onto an 8-track (yes, I’m THAT old) off the ONLY decent FM station in the area. I remember at first not being sure whether I wanted to use up any precious 8-track tape on the song because I didn’t know who this band was, and the beginning of the song is a bunch of stops and starts! Needless to say, I’m glad I finally hit “Record”! I played air drums for a while before getting my first set when I was around 15.

Rewind – I started in 5th grade playing the clarinet (a manly instrument if there ever was one……) until that fateful day in high school during marching band practice, when I found myself standing right behind a line of trumpet players blasting at triple forte (no relation to Will Forte). In a test to see if what I was playing had ANY impact on the overall sound of the marching band, I deliberately squawked a single, never-ending hideous note (think any Kenny G record….) to see if anyone would notice. No-one did. I quit the clarinet that day and joined the percussion section. Since then, I’ve played in alternative rock bands, an alt-country band, a Dixieland/bluegrass band (and spent a weekend in the Windsor county jail because of it), and various cover bands. Some kind of memorable, some not so much! I also played at Kensington and Oak Pointe Churches, meeting many amazing musicians and refining my playing a great deal.

Forward to the chance weekend at Oak Pointe Church where ‘just met’ guitarist Mark Salamango and I attempted Rush’s ‘YYZ’ during a sound check. We butchered it somewhat, but quickly realized that we had similar tastes in music and decided to get together to jam and “see what happens”. Mark knew Ed, and the result is what you hear today. HUGE thanks to my wonderful wife Cheryl and boys Jason and Jared for putting up with my frequent venturing off to Mark’s studio to record, to Ed for his incredible playing and to his wife Stephanie for letting him venture off too, and enormous thanks to Lori Salamango for letting us rattle the walls and floors putting this together. You are all greatly appreciated! Thanks also to Marco Sfogli for making us sound so pretty! I’m very proud of what we’ve written and hope you all enjoy it as much as we have putting it together!