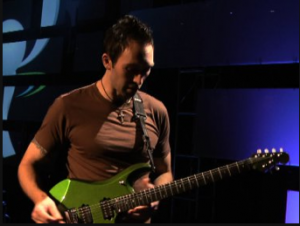 Mark Salamango was born in Warren, Mi. in 1973. He was an average kid with the exception that he could levitate, and read the minds of others.

Mark started playing saxomophone in 5th grade and quickly got excited about music in general. His earliest influence was Boots Randolph. Yup, the Yakety Sax man himself.

He studied sax all through middle school and high school and got his first gig playing in a wedding band called Shining Star.

Back at U of M, in his second junior year…Mark picked up a Mexican made Strat. He (also I) couldn’t put it down.

Much more happened since then, but to make a long story short, he fell in love with a girl, married, had a couple kids, bought a couple homes, built a recording studio, took a breath, and here we are…

Now Mark is playing in a couple bands (solo project, Tall Dark and Jim, and Messenger), managing a recording studio, writing tunes, practicing, playing at 2|42 Church, serving as President of a non-profit company RobotTown, performing duties as the Chief Information Officer (CIO) for the University of Michigan Center for Integrative Research in Critical Care, and being a loving father and husband. (In case my wife reads this…)